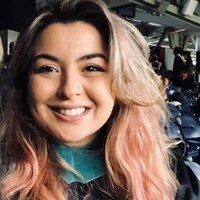 Zooming with a Scientist - Irene Sahinidis '19

Beginning three summers ago (2018), the Biology Department started a summer Dinner with a Scientist series where we invited a local scientist to speak to a small group of summer students over dinner.  In the spirit of this series, we continued with the series this summer in the form of a Zooming with a Scientist series.  This series of Zoom seminars are intended to help students explore the fields available to them with a degree in STEM (other than medicine).

Irene graduated from Boston College in 2019, where she majored in Biology with a minor in History as a pre-medical track student. While in college, Irene earned her certification as an Emergency Medical Technician and worked for two years as an EMT at Fallon Ambulance in Boston. Additionally, she served as the outreach and training coordinator with Boston College’s Office of Emergency Management. She also conducted research at the Boston College Institute for Scientific Research and collaborated with a Boston College Classical Studies Professor on the creation and generation of a Modern Greek literary citation database. Irene just completed a Masters of Professional Studies in Emergency and Disaster Management Degree at Georgetown University where she wrote her Capstone study on the Go Fever Impulse in technological industries. Irene currently works as a Program Specialist at the Department of Justice Office of the Inspector General and plans to pursue her PhD in Philosophy with a focus on Ethics and Ethical Decision Making in STEM.