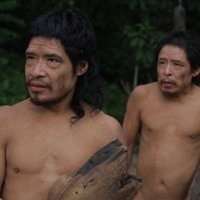 The Center presents this documentary film (runtime: 81 mins) with special guest Mariana Oliva, who will introduce the film and do a Q&A session after the screening.  A reception will follow.

The film follows Jair Candor, an official with Brazil’s indigenous affairs agency FUNAI, as he ventures into one of the Amazon’s protected indigenous lands, Piripkura. Only three Piripkura tribe-members are still alive today, and only two in their native land. The third, Rita, was forced to flee the lands when logging companies sent in mercenaries to kill the tribespeople, and thus lift government protections of the area. Rita accompanies Candor on his initial visits to confirm the continued existence of Pakyî and Tamandua, the last remaining Piripkura, an undertaking which must be done to sustain the areas protected status. Beyond the inherent dangers of living in the Amazon; corporate farms, fires, logging companies and massive budget cuts to aid agencies are constant threats to the two men. The documentary made by Renata Terra, Bruno Jorge and Mariana Oliva took over four years to be shot and produced and comes as a much needed counterpoint to the exploitation of indigenous human rights in Brazil. The documentary won the Amsterdam Human Rights Award at this year’s International Documentary Film Festival Amsterdam.

Register for the event at tinyurl.com/BCPiripkura or at the red Register button on the BC calendar event listing.

Two of only three known members of the Piripkura still live as nomads in the Amazon rainforest, in the Brazilian state of Mato Grosso. Their most important possession is a torch that was lit in 1998 and has remained so ever since. The area where they live is encircled by farms and sawmills, whose almost inevitable expansion is taking place through violent means. This area of rainforest can only keep its protected status if there’s proof that the two men, Pakyî and Tamandua, are still living there. So Jair Candor, coordinator for the protection of these areas, treks into the jungle in search of them, sometimes accompanied by their sole surviving family member Rita. Through this film, the crew provides proof of the two men’s existence. Piripkura sheds light on the tragedy befalling indigenous Amazon people—the systematic violence used against them is a constant menacing presence. Despite the impressive resilience and tenacity of the last of the Piripkura, an inevitable question hangs in the air: how long can it last?