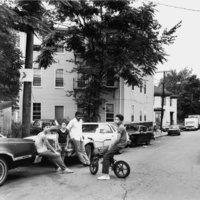 In 1987, Boston’s oldest and busiest 87-year old elevated train was demolished to make way for a new underground subway line. Sponsored by the MBTA  and organized by the Urbanarts Committee in 1985, John Lueders-Booth participated in a photographic project in 1985 to document the buildings, streets, and the people of the neighborhoods that would be most affected by the train’s removal. For 18 months, Lueders-Booth photographed areas between ChinaTown and Jamaica Plain with an 8 x 10 camera to capture how the structure intersected with the everyday lives of its residents. The McMullen Museum welcomes Jack Lueders-Booth for a virtual talk to discuss his forthcoming publication focused on this body of work, The Orange Line, to be published  in fall 2022 by Stanley Barker.

Free; open to the public; register by clicking here.

John Lueders-Booth’s taught photography at Harvard University between 1970 and 2000. His photographs are included in important collections, including those of the Addison Gallery of American Art, the Art Institute of Chicago; the deCordova Museum and Sculpture Park; the Hood Museum; the Fogg Art Museum; the Library of Congress; the Museum of Modern Art, NYC; the Museum of Modern Art, San Francisco CA; and the David Rockefeller Center for Latin American Studies at Harvard University. Recently Aperture included a series of Lueders-Booth’s photographs of Women Prisoners in their “Prison Nation” Issue. A selection of those images are now on view at the Davis Museum at Wellesley College through June 5, 2022.