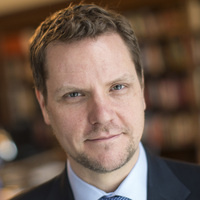 Michael Witmore is the seventh director of the Folger Shakespeare Library. He was formerly a Professor of English at the University of Wisconsin-Madison, and before that he served as an Associate Professor of English at Carnegie Mellon University. He has held an Andrew Mellon Postdoctoral Fellowship at the University of California, Los Angeles, a research fellowship and a curatorial residency fellowship at the Folger, and a predoctoral fellowship at the Max-Plank-Institut für Wissenschaftsgeschichte in Berlin. Among his more recent projects, he launched the Working Group for Digital Inquiry at the University of Wisconsin-Madison and organized the Pittsburgh Consortium for Medieval and Renaissance Studies. His numerous publications include five books: Landscapes of the Passing Strange: Reflections from Shakespeare, with Rosamond Purcell (2010), Shakespearean Metaphysics (2009), Pretty Creatures: Children and Fiction in the Early Renaissance (2007), Childhood and Children's Books in Early Modern Europe, 1550-1800 (2006), and Culture of Accidents: Unexpected Knowledge in Early Modern England (2001). He is currently working on a study of early modern wisdom literature and a book on the nature of digital inquiry in the humanities.

Presented by the Lowell Humanities Series.