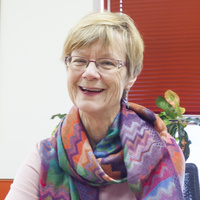 Merry Wiesner-Hanks: “Migrants and Missionaries: Women Take the Reformations Around the World”

Merry Wiesner-Hanks is a historian of early modern Europe, and also a world/global historian, whose work has been central to the integration of women, gender, and sexuality into both fields. Now Distinguished Professor of History and Women’s and Gender Studies Emerita at the University of Wisconsin-Milwaukee, she is the long-time senior editor of the Sixteenth Century Journal, former editor of the Journal of Global History, and the editor-in-chief of the seven-volume Cambridge World History (2015). She is the author or editor of thirty books and many articles that have appeared in ten European and Asian languages, and are widely used in teaching around the world, from middle school through graduate school. These include: What Is Early Modern History? (Polity, 2021); Christianity and Sexuality in the Early Modern World: Regulating Desire, Reforming Practice (Routledge, 3rd ed. 2020); (with Urmi Engineer Willoughby) A Primer for Teaching Women, Gender, and Sexuality in World History (Duke, 2018); A Concise History of the World (Cambridge, 2015). She is currently editing, with Mathew Kuefler, the four-volume Cambridge World History of Sexualities.