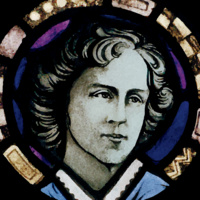 John J. Burns Library is pleased to host a book launch for Borderlands: The Art and Scholarship of Louise Imogen Guiney, the first edited collection of original essays published on Louise Imogen Guiney (1861-1920), Irish American poet, essayist, editor, literary critic, and epistolist, and the first volume to anthologize a selection of both her poetry and prose.

During her life in Boston and Britain, Guiney composed seventeen volumes of poetry and prose, contributed to many periodicals, edited and translated literary and religious texts, and wrote thousands of letters, many to and about central fin-de-siècle literary figures.

The program will feature remarks by contributors to the volume, including editors Jonathan Nauman and Holly Faith Nelson, and Libby MacDonald Bischof and Bridget Chapman. Discussion with the audience discussion will be followed by light refreshments.

A selection of Guiney’s books and manuscripts from the Guiney collections at Boston College and The College of the Holy Cross will be on display.