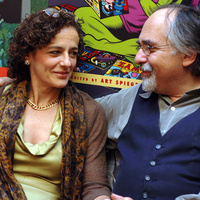 Françoise Mouly has been the art editor of The New Yorker since 1993, where she has overseen more than fourteen hundred covers. Many of these have been named cover of the year by the American Society of Magazine Editors (ASME). In 1978, she and Art Spiegelman, her husband and frequent collaborator, co-founded the groundbreaking comics anthology RAW. Together they also edited the New York Times-bestselling Little Lit series and the TOON Treasury of Classic Children’s Comics.

Ms. Mouly is the publisher, designer and editorial director of TOON Books, which she and Spiegelman launched in 2008. TOON Books is an imprint of comics for early readers and has garnered numerous awards including the Theodor Seuss Geisel Award given to “the most distinguished” book for beginning readers. In 2001, she was named Chevalier in the order of Arts and Letters by the French Ministry of Culture and Communication, and in 2011, she was awarded France’s highest honor, the Ordre National de la Légion d'Honneur. She has received an Honorary Doctorate in Fine Arts from Pratt Institute and multiple awards including the Richard Gangel Art Director Award from the Society of Illustrators. In September 2014, she was awarded the Eric Carle Museum Bridge Award for “sustained achievement in the realm of the illustrated book for young people.” In November 2015, Ms. Mouly received the Smithsonian magazine’s Ingenuity Award for her work in education, calling her a “transformative figure in comics.” In 2021, Ms. Mouly was inducted in the Will Eisner Hall of Fame.

Art Spiegelman has almost single-handedly brought comic books out of the toy closet and onto the literature shelves. In 1992, he won the Pulitzer Prize for his masterful Holocaust narrative Maus— which portrayed Jews as mice and Nazis as cats. Maus II continued the remarkable story of his parents’ survival of the Nazi regime and their lives later in America. His comics are best known for their shifting graphic styles, their formal complexity, and controversial content.

A major exhibition of his work was arranged by Los Angeles Museum of Contemporary Art, as part of the “15 Masters of 20th Century Comics” exhibit (November 2005). In 2005, Art Spiegelman was named one of Time Magazine’s 100 Most Influential People and in 2006 he was named to the Art Director’s Club Hall of Fame. He was made an Officier de l’Ordre des Arts et des Lettres in France in 2007 and—the American equivalent—played himself on an episode of “The Simpsons” in 2008. In 2011, Art Spiegelman won the Grand Prix at the Angoulême International Comics Festival, marking only the third time an American has received the honor (the other two were Will Eisner and Robert Crumb). The honor also included a retrospective exhibition of his artwork, shown in the Pompidou Center and travelling to the Ludwig Museum in Cologne, the Vancouver Art Gallery, the Jewish Museum in NYC, and the last stop at the AGO Art Gallery of Ontario. The accompanying book is CO-MIX: A Retrospective of Comics, Graphics, and Scraps. In 2015 he was elected a member of the American Academy of Arts and Letters. In 2018 he received the Edward MacDowell Medal, the first-ever given in comic art.

This event coincides with the recent opening of a major exhibition at the McMullen Museum of Art, Alternative American Comics, 1980–2000: “Raw,” “Weirdo,” and Beyond, featuring Mouly’s and Speigelman’s work.

Tickets are required (though still free) for this event.