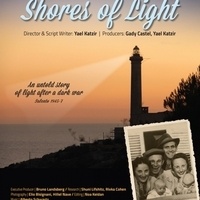 Many films have been made about the Holocaust, this unimaginable chapter of history is still full of surprises. The film focuses on the immediate post war period: 1945-7. Unveiling the story of the Displaced persons camps, at the tip of the heel of the Italian boot. This was a transitory phase for them, a time out or rather a recuperation period to normal life on their way to the Israel.
The sun, the sea, but mostly the Italian human warmth towards the survivors, captured my heart and imagination
It is an amazing story of rebirth. It shows the role and power of women, who were determined to fill the gap of their lost families and thus had the courage to give birth to their first children before they had a real home or even a formal ID. Bearing children in the DP camps was a constitutive event from personal, feminine, and Jewish perspectives. Against the fateful significance of motherhood during the Shoah, it was an expression of the female strength to survive and overcome the horrors of the exterminations. In the maternity hospital of the DP camp in Santa Maria di Leuca, hundreds of babies were born. ( 50 were traced down in Israel today).