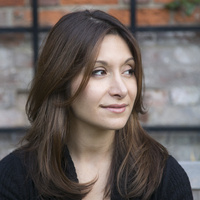 Dina Nayeri is the author of The Ungrateful Refugee, a finalist for the 2019 Kirkus Prize and the Los Angeles Times Book Prize. Her essay of the same name was one of the most widely shared 2017 Long Reads in The Guardian. A 2019 Columbia Institute for Ideas and Imagination Fellow, winner of the 2018 UNESCO City of Literature Paul Engle Prize, a National Endowment for the Arts literature grant (2015), O. Henry Prize (2015), Best American Short Stories (2018), and fellowships from the McDowell Colony, Bogliasco Foundation, and Yaddo, her stories and essays have been published by The New York Times, New York Times Magazine, The Guardian, Los Angeles Times, New Yorker, Granta New Voices, Wall Street Journal, and many others. Her debut novel, A Teaspoon of Earth and Sea (2013) was translated to 14 languages. Her second novel, Refuge (2017) was a New York Times editor’s choice. She holds a BA from Princeton, an MBA from Harvard, and an MFA from the Iowa Writers’ Workshop, where she was a Truman Capote Fellow and Teaching Writing Fellow. She lives in Paris.

Dina Nayeri will give a reading from The Ungrateful Refugee, followed by a moderated conversation and audience Q&A. In The Ungrateful Refugee, Nayeri asks what it is to be a refugee, to grapple with your place in society, attempting to reconcile the life you have known with a new, unfamiliar home. All this while bearing the burden of gratitude in your host nation: the expectation that you should be forever thankful for the space you have been allowed. Aged eight, Dina Nayeri fled Iran along with her mother and brother, and lived in the crumbling shell of an Italian hotel-turned–refugee camp. Eventually she was granted asylum in America. She settled in Oklahoma, then made her way to Princeton. In this book, Nayeri weaves together her own vivid story with the stories of other refugees and asylum seekers in recent years, bringing us inside their daily lives and taking us through the different stages of their journeys, from escape to asylum to resettlement.

Cosponsored by the Fiction Days Series and the English Department.

Please note this is a virtual event. Register here: https://bccte.zoom.us/webinar/register/WN_i0joW6dESOOqgLbYXx5-SQ