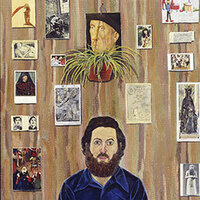 On loan from the Palmer Museum of Art at the Pennsylvania State University, Simon Dinnerstein’s The Fulbright Triptych (1971–74) was produced in an era of postwar art when minimalism, video art, and installation dominated the New York scene. At the time, figuration and even painting itself were out of fashion.

Dinnerstein started the monumental suite—his first foray into the medium—in Germany during a 1971 Fulbright fellowship to study printmaking. Adopting the medieval sacred form of an altar-sized triptych, he substitutes secular and highly personal, idiosyncratic iconography for traditional religious subject matter. In the central panel he features an engraved plate and printmakers’ tools below two windows depicting views from his studio in Kassel, Germany. The artist paints himself and his wife and baby daughter in the side panels. He fills the walls of each panel with details of well known Old Master paintings, drawings, and prints, children’s drawings, photographs, quotes, and sketches. Dinnerstein finished the Triptych in Brooklyn in 1974, “a little known masterpiece of 1970s realism” (according to Roberta Smith of the New York Times) in which the intersection of the personal and the historical prefigured the path that postmodernism would take a decade later.

The Fulbright Triptych is accompanied by an interactive presentation created by Rachel M. Straughn-Navarro that allows visitors to more fully understand the complex iconography of the work. The engraved plate depicted centrally in the Triptych also will be on view, as well as a print.