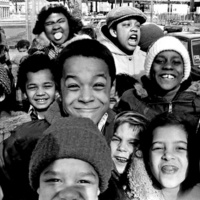 Photographing Chelsea in Transition, 1977–89 presents over eighty photographs by Arnie Jarmak (b. 1949, Marblehead, Massachusetts) from an archive of more than twenty thousand he produced as chief photographer for Chelsea’s daily newspaper, the Chelsea Record. Living in Chelsea during the late 1970s through the 1980s, Jarmak witnessed and recorded fundamental demographic and social changes in the city.

Among the last film photographers before the digital age, Jarmak used a Deardorff 8 × 10 inch field camera (displayed in the exhibition) to document Chelsea’s notoriously corrupt politicians, the many fires that raged through its aging housing stock and the celebrated firefighters who fought them, long-established businesses of European immigrants, and the arrivals of immigrants from Central America who enriched the city. Jarmak’s photographs chronicle these changes in sharply observed portraits of residents, lively vignettes of the city’s youth, and illustrations of community celebrations—a testament to the central role a local paper played in the life of a vibrant and complex city.

Recordings of Diana Larsen’s interviews with Jarmak accompany the exhibition as does an e-catalogue, edited by Ash Anderson and Larsen, including a biography of Jarmak by Larsen, an essay situating Jarmak’s work within the history of twentieth-century photography by Anderson, and a study of Chelsea’s demographic transformations by Marilynn S. Johnson.