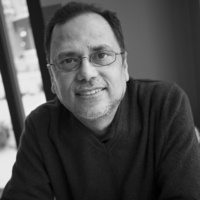 Dipesh Chakrabarty holds a BSc degree from Presidency College, University of Calcutta, a postgraduate Diploma in management from the Indian Institute of Management, Calcutta, and a PhD in History from the Australian National University. He is the Lawrence A. Kimpton Distinguished Service Professor in History, South Asian Languages and Civilizations. He is the Faculty Director of the University of Chicago Center in Delhi, a faculty fellow of the Chicago Center for Contemporary Theory, an associate of the Department of English, and by courtesy, a faculty member in the Law School.

His publications include several monographs and many articles including Provincializing Europe: Postcolonial Thought and Historical Difference (Princeton, 2000; 2008); The Climate of History in a Planetary Age (Chicago, 2021); and One Planet, Many Worlds (Brandeis, forthcoming 2023).

He is a founding member of the editorial collective of Subaltern Studies, a consulting editor of Critical Inquiry, a founding editor of Postcolonial Studies and has served on the editorial boards of the American Historical Review and Public Culture. He was one of the founding editors of the series South Asia Across the Disciplines. He served on the Board of Experts for non-Western art for the Humboldt Forum in Berlin and was a member of the Scientific Advisory Board to the Center for Global Cooperation Research (Bonn and Essen) for a few years from 2012. He is also an Associate in the Faculty of Arts and Social Sciences at the University of Technology, Sydney, 2018-2022.

Chakrabarty is the recipient of the 2014 Toynbee Foundation Prize for his contributions to global history and of the 2019 Tagore Memorial Prize awarded by the Government of West Bengal for his book The Crises of Civilization. He was awarded the degree of DLitt (Honoris Causa) by the University of London (conferred at Goldsmiths) in 2010 and an honorary doctorate by the University of Antwerp, Belgium, in 2011. He was awarded the Distinguished Alumnus Award by the Indian Institute of Management (IIM), Calcutta (conferred on the occasion of the fiftieth anniversary of the Institute in 2011). He was elected an honorary fellow of the Australian Academy of the Humanities in 2006 and a fellow of the American Academy of Arts and Sciences in 2004.