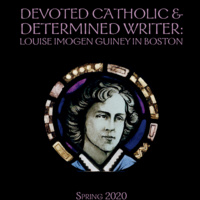 Louise Imogen Guiney (1861-1920), one of only two women represented in Bapst Library’s stained glass portraits of American authors, may have faded from the canon, yet she continues to offer a unique window into the multifaceted literary establishment of late 19th-century Boston. Guiney's family and friends connected her to Boston's literary circles where her own drive to write—first, poetry, and later, stories and biographical essays— earned her acclaim, if not the financial independence she sought.

Guiney’s choice of subjects was informed by her Catholic beliefs, her admiration for Jesuits, and her sojourns in Ireland and England. This retrospective exhibit focuses on her relationships with Catholic religious leaders, fellow writers, and publishers in Boston.