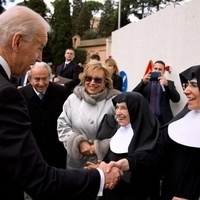 The Democratic Party and Catholic Voters in the 2020 Election

Session III of a Webinar Series on Catholic Voters and the 2020 Election, co-sponsored by The Boisi Center for Religion and American Public Life, Boston College; The Greenberg Center for the Study of Religion in Public Life, Trinity College; and The New Hampshire Institute of Politics, St. Anselm College.

Register in advance for this webinar

After registering, you will receive a confirmation email containing information about joining the webinar.

Shaun Casey is director of the Berkley Center and a professor of the practice in Georgetown's Walsh School of Foreign Service. He is also a senior fellow with the Luce Project on Religion and Its Publics at the University of Virginia. He previously was U.S. special representative for religion and global affairs and director of the U.S. Department of State’s Office of Religion and Global Affairs. He has also held positions at Wesley Theological Seminary in Washington, D.C., the Center for American Progress, and the Center for Strategic and International Studies. Casey has written on the ethics of the war in Iraq, as well the role of religion in American presidential politics. He is the author of The Making of a Catholic President: Kennedy vs. Nixon 1960 (2009) and co-editor of The Oxford Handbook of Political Theology (forthcoming, with Michael Kessler); he is writing a book on ethics and international politics tentatively titled Niebuhr’s Children. Casey holds a B.A. from Abilene Christian University, MPA from Harvard Kennedy School, and M.Div. and Th.D. in religion and society from Harvard Divinity School.

Timothy Matovina is a Professor and Chairperson of the Theology Department at the University of Notre Dame. His most recent books are Theologies of Guadalupe: From the Era of Conquest to Pope Francis and Latino Catholicism: Transformation in America’s Largest Church, which won five book awards, including selection as a CHOICE “Outstanding Academic Title” for 2012. In addition to his scholarly work, Matovina offers presentations and workshops on U.S. Catholicism and Latino ministry and theology throughout the United States.

Joseph Tomás McKellar is co-director of PICO California, the largest faith-based organizing network in California focused on racial equity and promoting a culture of belongingness. In his role, McKellar provides strategic leadership to 10 multi-faith, multi-racial community organizations representing 450,000 Californians, and accompanies a talented staff team running power building and leadership programs for 2,500 volunteers. He also helps lead PICO’s “Faith Votes” program, which seeks to engage one million more young voters, low-income voters, and voters of color by 2020 around a vision for a State of Belonging. McKellar guides PICO’s statewide campaigns to transform the criminal justice system, protect and promote immigrant families, increase affordable housing, and create an inclusive economy. McKellar founded and directed Faith in New York and Faith in the Valley in California, nonprofits dedicated to advancing racial, economic, and environmental justice. McKellar previously worked as a Community Organizer in San Diego and Orange County, as an Assistant Teacher with the Jesuit Volunteer Corps in Boston, and as a Prison Minister in San Diego. He earned a Bachelor of Arts in Spanish and Political Science, with a minor in Biology, from the University of San Diego. McKellar is a Fellow of the inaugural class of the Civil Society Fellowship, A Partnership of ADL and The Aspen Institute, and a member of the Aspen Global Leadership Network.

Mark Silk (convener) is director of the Leonard E. Greenberg Center for the Study of Religion in Public Life and Professor of Religion in Public life at Trinity College in Hartford. He is the author of Spiritual Politics: Religion and America Since World War II, Unsecular Media: Making News of Religion in America, and (with Andrew Walsh) One Nation, Divisible: How Regional Religious Differences Shape American Politics. He writes a weekly column for the Religion News Service.