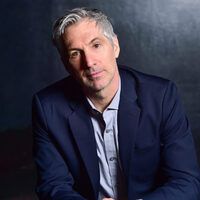 Stephan Wolfert (US Army, '86-'93, Medic & Infantry Officer) left a career in the military for a life in the theatre after seeing Shakespeare's Richard III. Stephan received his Master of Fine Arts degree from Trinity Repertory Conservatory in Providence, Rhode Island. On Broadway, Stephan created and directed the military segments for Twyla Tharp & Billy Joel's Tony-Award winning production Movin' Out. He also co-created the largest touring Shakespeare Company in New England, directed and taught acting Shakespeare at Cornell University and at Antelope Valley College. Stephan is also the Founding Artistic Director of Shakespeare & Veterans, and the Veterans Center for the Performing Arts. He is currently a company member and the Head of Outreach for Bedlam in NYC. He is also the creator of DE-CRUIT: a program to reintegrate military Veterans using classical actor training. Stephan recently performed his one-man show Cry Havoc! Off-Broadway in NYC. Member: AEA, AFTRA- SAG.

Presented by the Lowell Humanities Series and cosponsored by the Theatre Department.

*Please note this is a virtual event. Registration will open on October 21st.