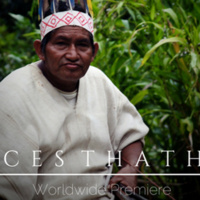 Screening of "Voices that Heal" with special guests

Voices That Heal is a documentary film which focuses on the wisdoms and traditions of four indigenous communities located in the Southeast Amazon of Peru. The film's objective is to preserve the healing rituals deep within the Amazon Rainforest of an almost extinct culture whose language is only spoken by twenty or so people.

WIth special guests for Q&A after the film:

The natural world of the rainforest shaman

This documentary takes a close look at the healing practices of the rainforest Huachipaeri society. Their rituals make use of sacred and therapeutic plants and hold a very ancient tradition in the Amazonian rainforest area. Although this area has maintained its health practices for centuries, today it is not valued nor understood from the perspective of the outside world. This traditional practice is also threatened by the loss of biodiversity in the rainforest region, which is where the healer's’ power comes from.

The main objective of this film is to understand the role of language and how it is used as part of curanderismo (a system of traditional healing) of the Amazonian people. The healing through language is manifested through ceremonial songs, such as the “Eshuva Prayers”, and in the use of certain vocabulary. The semantics and poetics of the words are the primary form of orally transferring the healing powers of the curer. The Huachipaeri tongue and the “Eshuva Prayers” constitute a valuable and essential element of their culture, which illuminates their traditions and beliefs.

Join us as we glimpse into the healing practices of Huachipaeri culture. Voices That Cure is our fourth film of the nine film series The Mysteries of the Andes.