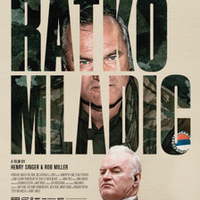 Screening of "The Trial of Ratko Mladic" with filmmaker Henry Singer

On the 22nd of November 2017, the Bosnian Serb General, Ratko Mladic, was found guilty of genocide and crimes against humanity at the International Criminal Tribunal For The Former Yugoslavia in The Hague and sentenced to life in prison.

Mladic was one of the most infamous figures of the Bosnian war of the 1990s and became synonymous with the murder of over 7,000 Muslim men and boys in Srebrenica in 1995 -- the worst crime on European soil since World War II.

Filmed over five years with unprecedented access to the Prosecution, the Defence, witnesses who came forward to give evidence, and Mladic's family members and supporters in Bosnia, this film tells an epic story of justice, accountability and a country trying to escape from its bloody past.

Light refreshments to be served. RSVP at tinyurl.com/BCMladic

Henry Singer (co-director, co-producer) is one of Britain's most critically acclaimed documentary directors. He has won or been nominated for every major British documentary award, including the BAFTA, Royal Television Society, Grierson, Broadcast, Broadcasting Press Guild, the Televisual as well as the Emmy, and his films have been screened at festivals around the world.

Among his prize-winning feature length films are 'The Falling Man' about a photograph of someone who jumped or fell from the World Trade Center on 9/11, 'The Untold Story of Baby P’, about the death of a seventeen month toddler in north London, and 'The Blood of the Rose', about the brutal murder of the filmmaker and conservationist Joan Root in Kenya. Broadcast Magazine has named Singer one of the top ten directors working in British television. In its citation, the magazine said: ‘Singer is perhaps the most intimate, sensitive filmmaker working today. He does not just observe his subjects but seeks to take us inside them, to live with them and make us see their perspectives.’

Steven Arrigg Koh, the inaugural recipient of the Marianne D. Short and Ray Skowyra Sesquicentennial Assistant Professorship, teaches and writes in the areas of criminal law and procedure, international law, and legal theory. His publications, which focus on the intersection of U.S. and international criminal law, have appeared in journals such as New York University Law Review, Cornell Law Review, and Columbia Journal of Transnational Law. As a contributor to the Just Security law blog, he also provides analysis on U.S. criminal cases with a foreign nexus—an emerging area that he has termed “foreign affairs prosecutions.”

Among other accomplishments, Koh has been a Visiting Professional at the International Criminal Court (ICC), where he advised the Legal Adviser to the ICC Presidency on matters including the enforcement of sentence agreements with States party to the Rome Statute of the ICC. Also, he has served as an Associate Legal Officer at the U.N. International Criminal Tribunal for the former Yugoslavia, he served in Chambers on the Prosecutor v. Radovan Karadžić trial, one of the capstone cases in the Tribunal’s history regarding charges of war crimes, genocide, and crimes against humanity.

Among many other accomplishments, Groome spent over 11 years as a senior war crimes prosecutor at the International Criminal Tribunal for the former Yugoslavia. He investigated and drafted the first genocide indictment against a sitting head of state, Slobodan Milošević, and was the Senior Trial Attorney for the Bosnia indictment. In total, Groome led the prosecution of five international criminal trials including the case against Ratko Mladić, who was convicted of genocide for the murder of over 7,000 men and boys in Srebrenica in 1995. He led eight large complex international investigations of senior military, political, and police officials. Groome’s cases all included crimes of sexual violence against women, men, and children. He was instrumental in the development of Joint Criminal Enterprise, a theory of criminal responsibility often used to assess the culpability of senior officials for the crimes committed by their subordinates. Two documentaries have been made about Professor Groome’s cases: The Trial of Ratko Mladić (PBS/Frontline 2019) and Crimes Before the ICTY: Višegrad (UN TV 2017). His work has also been featured in BC Law Magazine (2020).