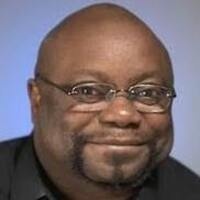 The Hellfighter: For those in the country who do not believe in "systemic racism," this performance is a glimpse of how much you do not know. It is designed to give the audience a longitudinal view of the struggles African Americans (and others) have faced in their effort to attain the American dream. From military indignity to race massacres. From redlining, to neighborhood segregation and modern-day bigotry; Hellfighter is the story of how one family fought for us all.

Ron Jones has been an educator, writer, actor and social activist for over 25 years. As a founding member of the Program Urban Improv; he did no less than 250 workshops a year throughout New England for young people using improvisation as a tool for self-expression and violence prevention. In 2002 Urban Improv won an EMMY Award for Best Children’s Programming for the television special “Re:Action.” In 2004 his program was awarded a Hamilton Fish Foundation (Federal) Grant to investigate their effectiveness in curbing violence in youth.

Mr. Jones is the former Artistic Director and Executive Director of ImprovBoston; the region’s largest and most popular comedy troupe. He is currently Executive Director of Dialogues on Diversity. Dialogues on Diversity is the nation’s premier social justice, diversity awareness theater company preforming more than 100 Performances, Lectures and Workshops in North America annually. He has created a range of performance, lecture, game and workshop platforms designed to help individuals and organizations address issues of cultural difference in a more open, healthy and respectful way. They strive to help people understand that systems of bias, bigotry and the range of "isms" that people suffer from are human behaviors born out of our inability to see ourselves in others.

In 2019 Mr. Jones was awarded a Mass Humanities Grant to Re-Launch his youth theater production “Roxbury Strong: A Story of Resilience” as a summer program. The play examines the social forces the historic Black neighborhood has had to deal with over time. From family to systemic racism to gentrification. Mr. Jones considers this play a theatrical social studies lesson for the youth who participated.

Presented with the Portico Program

*Please note this is a virtual event. Registration details to follow at a later date.