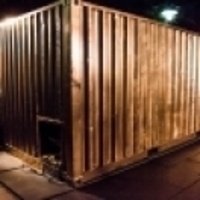 The Refugee Portal is the centerpiece of The Refugee Project at BC. Shared_Studios has transformed a shipping container into a studio with a wall-sized videoconferencing screen that connects to other "portals" worldwide to create uncommon conversational/educational opportunities. For four hours each morning from Nov 13-16, the Boisi Center for Religion and American Public Life will host a series of 25-minute conversations between small groups of 3-6 BC people and small groups of Syrian and Iraqi refugees/IDPs in Iraq, Jordan, and Berlin. Conversations will center on music, sports, family, and culture, as well as the particular migration experiences of people on both ends of the portal.

For an opportunity to enter into a conversation in the portal during one of the sessions, sign up on the registration page. Not everyone who signs up will be able to can get a turn, because of scheduling issues and space constraints, but the organizers will work to get as many people as possible into the conversations.

Sponsored by the Boisi Center for Religion and American Public Life, in collaboration with the Harvard Divinity School, the American Academy of Religion, and Shared_Studios (with funding from the Henry Luce Foundation).