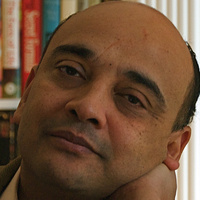 Kwame Anthony Appiah: Cosmopolitanism: Ethics in a World of Strangers

Kwame Anthony Appiah is a British-born Ghanaian-American philosopher, cultural theorist, and novelist whose interests include political and moral theory, the philosophy of language and mind, and African intellectual history. His most recent publication, The Lies That Bind, is based on his 2016 BBC Reith Lectures on "Mistaken Identities." He is working on a book tentatively entitled On the Very Idea of Religion for Yale University Press, which is based on his 2016 Terry lectures at Yale. He has taught at Yale, Cornell, Duke, and Harvard, and lectured at a number of universities in the United States, France, Germany, Ghana, and South Africa. He is currently a Professor of Philosophy and Law at New York University, and teaches both in New York and Abu Dhabi.

Presented by the Lowell Humanities Series and cosponsored by the Clough Center for the Study of Constitutional Democracy, the Global Citizenships Project, and the International Studies Program.

***Please note the date for this event has changed since first advertised. We apologize for any inconvenience.***