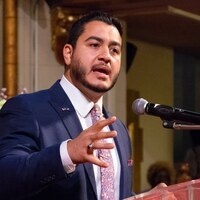 Named “The new Obama” by The Guardian, Dr. Abdul El-Sayed is a physician and public health expert who ran to be the first Muslim-American governor of Michigan, ever. His campaign excited Americans, with his focus on public health, education, diversity, and dialogue.

Before running for governor, El-Sayed served as Health Commissioner in Detroit, where he rebuilt Detroit’s Health Department after it had been privatized during the city’s municipal bankruptcy. At 30, he was the youngest health official in a major US City. Under his leadership, the Department created a program to provide every child in the city with a free pair of glasses; stood up to corporate polluters, forcing them to reduce emissions and invest in parks; and had every school, daycare, and Head Start building tested for lead in the water. He was responsible for multiplying city funding for public health tenfold, and attracting millions of dollars in grants. Under his direction, the Department became a national leader in public health innovation.

El-Sayed holds a Doctorate in Public Health from Oxford University, where he was a Rhodes Scholar, as well as an MD from Columbia University. He graduated with Highest Distinction and Phi Beta Kappa from the University of Michigan.

Registration is not required. Doors open at 5:00 PM, and seating is based on a first come-first serve basis