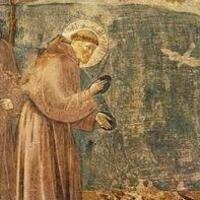 Today, as in the past, descriptions of the newly born Society of Jesus tend to emphasize the boldly innovative, at times startling, unique aspects of its spirituality as if Jesuit self-identity and "way of proceeding" were a radical break from sixteen centuries of Church tradition and from the behavior of the long-established apostolic religious orders. While, yes, there was definitely discontinuity with tradition in how the Jesuits saw themselves and how they behaved as a community of apostolic men, Ignatius's break with the past was neither total nor even necessarily massive. Ignatian spirituality was in many ways an evolution, not revolution, with respect to the past, drawing inspiration from the received models of the Catholic approach to apostolic mission. Among the most conspicuous sources of that inspiration and those models was, by far, the Franciscan Order, which during Ignatius's lifetime, was one of the oldest, largest, and most influential apostolic religious orders, pastorally, intellectually, and culturally.

As this presentation will illustrate, not only did Ignatius, in Spain, grow up in and, in Rome, live his adult life in a spiritual environment deeply imbued with Franciscan ideals and modes of spiritual expression, he also, consciously or unconsciously, drew from them in giving his new "Society" its characteristic identity and mode of being. The Franciscan roots of Jesuit spirituality are multiple and significant, ranging from the very name of the Society to the supposedly quintessential "Jesuit" principles of "contemplatives in action" and "application of senses."

Lunch will be provided. Please RSVP.

Mission and Ministry - Center for Ignatian Spirituality, BC Home page

The Center for Ignatian Spirituality