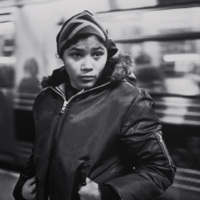 The documentary genre known as street photography is this century’s most fundamental and pervasive form of photographic image-making. Producing such images, for the professional artist and hobbyist alike, requires little more than a camera and a comfortable pair of shoes.

Street photography is essentially visual note-taking, the result of individuals’ desire to record compelling objects or moments as they move through life. Their subjects may be around the corner or on the other side of the planet. Historically, street photography has provided a metaphoric mirror held up to the world, one that has played an important role in introducing one culture to another, often with the result of promoting mutual understanding.

In conjunction with a panel discussion organized by Karl Baden entitled When Everyone Has a Camera: Street Photography, the Right to Free Expression, and the Right to Privacy in the Internet Age on November 13, the McMullen Museum presents a selection of documentary photographs from its collection. All were made on the streets or in the subways of New York City, one of the world’s capitals of street photography.

Because street photography occurs in a public space it has been protected as a right to free expression under the US Constitution’s First Amendment. The digital revolution of the past three decades, social media, the ubiquitous smartphone, and increasingly high resolution, affordable surveillance cameras, however, have blurred the line between public and private spaces. Suspicion and resistance by the general public has grown to being photographed by a random individual, especially without permission. At the same time, particularly in urban environments, the public is constantly on camera, surveilled by governmental and corporate entities, from body cams on a police officer’s lapels to satellite cameras powerful enough to read license plates. It is these paradoxical issues that the panel and exhibition seek to highlight and debate.

The first section of the exhibition features Alen MacWeeney’s rarely seen subway photographs. MacWeeney took them in the late 1970s with a small, hand-held camera, and printed them recently, through the archival inkjet process, as large-scale panoramas. However, these outsized images are not true panoramas; rather, each print is the sum of joining two photos of conventional 35 mm proportion and printing them as a single panorama. The result is a surreal blend of format and content, approximating the confinement of a subway car.

The exhibition’s second section includes images by a diverse group of photographers who took pictures on New York City streets from the 1920s into the twenty-first century. Walker Evans was the first to create a series of candid photographs in the New York subways, which he later published in a book Many Are Called. Berenice Abbott, Aaron Siskind, Jerome Liebling, and Walter Rosenblum participated in the Photo League, a group that banded together around social causes between 1936 and 1951.

Under the First Amendment, all the photographers in this exhibition still would have the right to work in the same manner. The question is whether they would encounter more resistance today. The short answer is probably yes. Despite, for example, that New York City law permits Alan MacWeeney to take pictures in the subway, chances are greater now that he would be confronted by other passengers questioning his intent. Someone might even call the police. Walter Rosenblum would almost certainly arouse suspicion if photographing children, even with their parents.