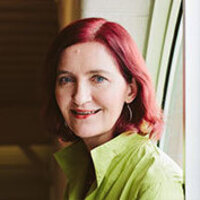 Emma Donoghue: The Pull of the Stars

Born in Dublin, Ireland, in October 1969, Emma is the youngest of eight children. In 1990 she earned a first-class honours BA in English and French from University College Dublin. In 1997 she received her PhD (on the concept of friendship between men and women in eighteenth-century English fiction) from the University of Cambridge. Emma Donoghue is an Irish-Canadian playwright, literary historian, novelist, and screenwriter. Her 2010 novel Room was a finalist for the Man Booker Prize and an international best-seller. Donoghue's 1995 novel Hood won the Stonewall Book Award and Slammerkin won the Ferro-Grumley Award for Lesbian Fiction. Her most recent publication is a novel called The Pull of the Stars (2020).

Emma Donoghue will give a lecture and reading based upon her most recent novel. The Pull of the Stars is inspired by the centenary of the Spanish Flu pandemic of 1918 and is set in a Dublin hospital where a nurse midwife, a doctor, and a volunteer helper fight to save patients in a tiny maternity quarantine ward. As reviewer Maureen Corrigan has claimed, Donoghue has “given us our first pandemic caregiver novel — an engrossing and inadvertently topical story about health care workers inside small rooms fighting to preserve life.” This reading will be followed by a moderated discussion and audience Q&A.

Cosponsored by the Irish Studies program.

*Please note this is a virtual event. Registration will open March 24, 2021.