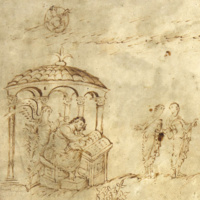 Art, Art History & Film Colloquium Lecture: “The Hebrew Psalms as Inspiration for the Imagery of the Utrecht Psalter” by Pamela Berger

The Art, Art History & Film Department and the McMullen Museum welcome Boston College Professor of Medieval Art Pamela Berger for a virtual colloquium lecture on the Utrecht Psalter. To regiser for the talk, visit https://tinyurl.com/yxppq37q.

The Utrecht Psalter is an illustrated text of the Psalms executed near Reims, France some time between 816 and 835. In the mid-1990s Koert van der Horst demonstrated that the Psalter’s Latin text is derived from a different source than its images. Since the illustrations were not necessarily allied with the Latin text, they could have been created with a different text at hand. Berger demonstrates that this text was the original Hebrew version of the Psalms. It has long been known that the specifically Christian scenes in the illustrated Psalter were interpolated by the ninth-century artists and were not present in the late antique model. Berger argues that only the Hebrew text of the Psalms and/or its ancient Jewish commentary—the Midrash on Psalms—can explain many of the puzzling or obscure motifs in the Utrecht Psalter. Professor Berger will analyze several of the Utrecht Psalter illustrations to prove the hypothesis that its imagery was not dependent on a Latin, Christian version of the text, but rather on a late antique illustrated Hebrew version.

Pamela Berger teaches medieval art history and film at Boston College. Her research centers mostly on problems in iconography. Professor Berger’s books include The Notitia Dignitatum, a study of late antique imperial imagery; The Goddess Obscured, an analysis of how the goddess of seeding and sowing was transformed in the imagination of the peasantry into the Virgin Mary and a variety of female saints; and The Crescent on the Temple, which traces the transformation in art of the Muslim shrine of the Dome of the Rock into a structure standing for the Temple of Solomon. Most recently she has published Hebrew Psalms and the Utrecht Psalter: Veiled Origins, the subject of today’s colloquium. Berger is also the writer, producer, and/or director of three feature films: Sorceress, The Imported Bridegroom, and Killian’s Chronicle.

Free; open to BC faculty, staff, and students only