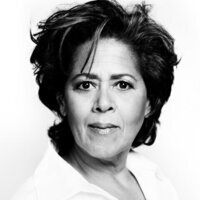 Playwright, actor, and professor Anna Deavere Smith uses her singular brand of theatre to highlight issues of community, character, and diversity in America. Best known for crafting one-woman shows based on conversations with real people from all walks of life, Smith turns her interviews into scripts, transforming herself into an astonishing number of characters. Smith has been awarded the Dorothy and Lillian Gish Prize, one of the largest and most prestigious awards in the arts, as well as the National Humanities Medal. In 2016, she was awarded a Guggenheim Fellowship for theatre arts. Smith’s plays include Fires in the Mirror, the Tony-nominated Twilight: Los Angeles, and Notes from the Field: Doing Time in Education, which explores the cycle of suspension from school to incarceration prevalent in low-income communities. Smith’s television credits include The West Wing, Black-ish, and Madame Secretary. A University Professor at NYU's Tisch School of the Arts and an affiliate with the NYU School of Law, Smith delivered the 2015 NEH Jefferson Lecture in the Humanities.