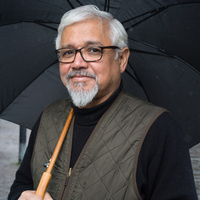 Amitav Ghosh's writing, which includes nine novels and six works of nonfiction, has been translated into over 30 languages and appeared in publications like The New Yorker, The New Republic, and The New York Times. His most recent publications include The Great Derangement: Climate Change and the Unthinkable (2016) and Flood of Fire (2015), the concluding novel of his Ibis trilogy. Ghosh holds two Lifetime Achievement awards and four honorary doctorates, and he is the first Indian English-language writer to earn the Jnanpith Award for his outstanding contributions to literature. He has taught at Dehli University, Columbia University, Queens College, and Harvard University. His latest book, Gun Island, is due to be published in 2019.

Presented by the Lowell Humanities Series and cosponsored by the Asian Studies Program, Environmental Studies, the History Department, and the English Department, and with the support of an Institute for the Liberal Arts Major Grant Award.