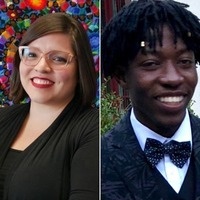 Advocating for Unaccompanied Children at the US Southern Border: Challenges and Legal Strategies

Join the Center for a chat with Boston College Law School Alumna and Legal Services Director at Immigrant Defenders Law Center in Los Angeles, Yliana Johansen-Mendez, and her special immigrant juvenile client, Ibrahim Haruna. Yliana will be discussing how the Trump Administration’s cruel immigration policies and practices have negatively impacted some of the most vulnerable immigrants, specifically unaccompanied children. This Administration has changed the rules of the game, making it harder to obtain protection under U.S. immigration laws. In the middle of a global pandemic the U.S. government has used COVID-19 as an excuse for fast tracking deportations and circumventing laws that exist to protect children from threats of abuse, persecution, and human trafficking. Her client, Ibrahim, is an orphan from Ghana that was granted special immigrant juvenile status and lawful permanent residency after a long legal battle with a particularly hostile ICE attorney who has been emboldened by Trump’s policies and rhetoric. The story of his journey as a stowaway on a cargo ship, and an unaccompanied minor travelling alone from South America northward to the U.S.-Mexico border, will highlight the difficulties many migrants face when seeking safety in the U.S. and the challenges they face once they arrive.

Yliana Johansen-Méndez is Legal Services Director for Immigrant Defenders Law Center (ImmDef) in Los Angeles, California and oversees ImmDef’s Children’s Representation Project. Yliana attended Boston College Law School and through CHRIJ’s Post-Deportation Human Rights Project assisted in the organization of Know-Your-Rights presentations throughout the New England area. After law school, Yliana launched her career representing unaccompanied minors as an Equal Justice Works Fellow at Kids in Need of Defense, through which she paved the way for obtaining special immigrant juvenile status (SIJS) for abused, abandoned and neglected children through California family courts. Thereafter she was accepted to the DOJ Attorney General’s Honors Program, through which she served at the Executive Office for Immigration Review (EOIR) as Attorney Advisor for the Las Vegas Immigration Court. After almost five years in government service at EOIR and as an Asylum Officer at the U.S. Citizenship and Immigration Services, in February 2018 she returned to non-profit immigration removal defense as part of ImmDef’s leadership team. Her years of experience in nonprofit and with government immigration agencies provide her with a unique perspective and insight which make her a fierce immigration advocate. She currently leads a team of 25 attorneys who focus on representing unaccompanied minors in removal proceedings, serving more than 800 clients in the Greater Los Angeles Area.

Ibrahim Haruna arrived in the U.S. as an unaccompanied minor in 2015. He left his home in Accra, Ghana at the age of 14, just a few months after his mother’s death left him orphaned. Ibrahim stowed away on a cargo ship until it docked in Colombia, where he survived by doing odd jobs and panhandling. After several months, Ibrahim made his way northward to Panama, travelling through Central America and Mexico primarily on foot and by bus. When he arrived at the US-Mexico border he was identified as an unaccompanied minor and transferred to a long-term foster care program through the Office of Refugee Resettlement. Although Ibrahim’s special immigrant juvenile status (SIJS) application was approved in 2016, his application for lawful permanent residency was hotly contested by ICE for several years in immigration court. With help from his attorneys at ImmDef, Ibrahim’s residency application was finally approved by USCIS and his removal proceedings were closed in Fall 2019. Today, Ibrahim is a student at Riverside City College in California and remains in the Unaccompanied Refugee Minor (URM) independent living program.

RSVP at tinyurl.com/Oct1CHRIJ or the red Register button at the event listing and a Zoom link will be sent out before the event

RSVP at tinyurl.com/Oct1CHRIJ or the red Register button at the event listing and a Zoom link will be sent out before the event