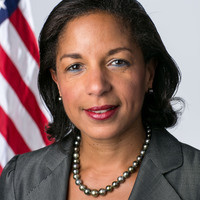 Ambassador Susan E. Rice is currently Distinguished Visiting Research Fellow at the School of International Service, American University, and a Non-Resident Senior Fellow at the Belfer Center for Science and International Affairs at Harvard’s Kennedy School of Government. She is also a Contributing Opinion Writer for the New York Times.

As U.S. Permanent Representative to the United Nations and a member of President Obama's Cabinet (2009-2013) to which she was unanimously confirmed by the Senate, Rice worked to advance U.S. interests, defend universal values, strengthen the world's security and prosperity, and promote respect for human rights. In a world of 21st Century threats that pay no heed to borders, Rice helped rebuild an effective basis for international cooperation that strengthened the United States’ ability to achieve its foreign policy objectives and made the American people safer.

Rice received her Master's degree (M.Phil.) and Ph.D (D.Phil.) in International Relations from New College, Oxford University, England, where she was a Rhodes Scholar. She was awarded the Chatham House-British International Studies Association Prize for the most distinguished doctoral dissertation in the United Kingdom in the field of International Relations in 1990. Rice received her B.A. in History with honors from Stanford University in 1986, where she was junior Phi Beta Kappa and a Truman Scholar. In 2017, French President Francois Hollande presented Ambassador Rice with the Award of Commander, the Legion of Honor of France, for her contributions to Franco-American relations.

Registration is not required. Doors open at 3:30 PM, and seating is based on a first come-first serve basis