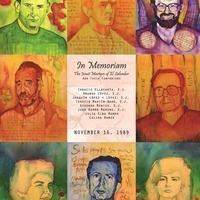 30th anniversary commemoration of the martyrs of El Salvador

Special event to commemorate the 30th anniversary of the murders of six Jesuits and their two companions who stood in solidarity with the poor of El Salvador duing the country's brutal civil war.  The killings, which took the life of Jesuit Ignacio Martín-Baró, were the occasion for establishment of the Ignacio Martín-Baró Fund for Mental Health and Human Rights, a partner project of the CHRIJ.

And a greeting from Spain from Carlos Martín-Baró, brother of slain Jesuit, Ignacio Martín-Baró

A reception will follow the lecture. RSVP at tinyurl.com/SalvadorRSVP or at the Register button at the right of the event listing.

Rep. James McGovern has been a longtime human rights defender in his political career. He was part of Capitol Hill staff of fomer US Representative Joe Moakley of Massachusetts. He was appointed by Moakley in 1990 to lead a House task force investigating the 1989 murder of six Jesuit priests and two women in El Salvador by the Salvadoran Army. He later advocated cutting off U.S. funding for the U.S. Army School of the Americas, where several of the military perpetrators of the murders had been trained.

For over 25 years, Chung-Wha has worked on a range of social justice issues locally and internationally, through organizing, policy advocacy, coalition building and philanthropy.

M. Brinton Lykes, PhD, is Professor of Community-Cultural Psychology and Associate Director of the Center for Human Rights and International Justice at Boston College. Her work with survivors of war and state-sponsored violence draws on cultural resources, the creative arts and participatory action research methodologies to analyze the causes and document the effects of violence, working with local protagonists to develop programs that aspire to rethread social relations and transform social inequalities underlying structural injustices.  She is co-author of the recent book, Beyond repair? Mayan women’s protagonism in the aftermath of genocidal harm (Rutgers Press, 2019). In addition to co-founding the Martín-Baró Fund, she serves as editor-in-chief of the International Journal of Transitional Justice and is an active board member of Grassroots International, IMPUNITY WATCH, Women’s Rights International, and other organizations.

Center for Human Rights and International Justice, BC Home page